Joining the fight against the plastic tide, Dutch-based brand Bottle Up has launched in the UK with their pre-filled, reusable, BPA free, plant-based water bottles.  The bottles will be sold in 438 WHSmith locations across the UK including train station and airport locations such as Manchester Piccadilly, Euston, Heathrow, Luton, Waterloo, and Victoria, as well as several hospitals.

The brand, founded by three Amsterdam-based friends, aims to aid the widespread international single-use plastic crisis by stocking Bottle Up in popular destinations across Europe. Already a success in the Netherlands, Bottle Up is now set to make its mark in the UK.

In the UK alone it has been reported that over 7.7 billion single-use plastic water bottles are consumed every year, with such water bottles making up over half of the plastic waste in the Thames. Whilst steps are being taken for plastic reduction in homes, the Dutch based entrepreneurs want to take the fight one step further by actively encouraging, and giving people on the go and tourists the opportunity to buy inexpensive reusable bottles pre-filled with water for the duration of their stay to avoid 'grab-and-go' culture.

Taking on board the environmental implication of water bottle distribution (production and transportation of the demand for bottled water uses the equivalent of 160 million barrels of oil per year), the 'London' bottle is made in England and filled with English spring water. The water is provided by Elmhurst spring in Staffordshire, and the sugar cane based bottles are made in Wolverhampton.  5p from every bottle sold is donated to a charity working to ensure everyone can enjoy clean water, decent toilets and safe hygiene. The first charity Bottle Up has worked with is Charity: Water. 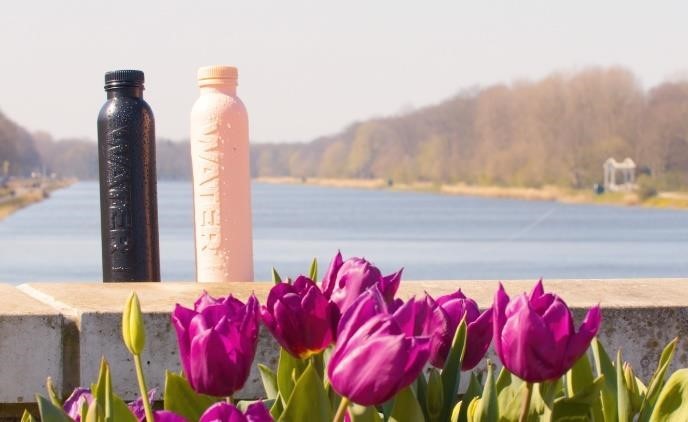 Having lived in Amsterdam's city centre for most of their adult lives, owners Jasper, Bart and Andrew started Bottle Up after seeing the impact tourist waste had on increasingly popular local tourist hot-spots. Andrew Eversden commented 'After one use these bottles often end up in or next to waste bins or even worse, in the canals and rivers. The millions of people visiting Amsterdam every year, leave behind a trail of waste from single use water bottles.'

Collaborating with Braskem fulfilled the concept of Bottle Up. Using the I'm greenTM polyethylene was the most sustainable solution compared to other conventional alternatives. This is in large part because of the fact that the raw material is sugarcane, a source of renewable carbon. For every kg of I'm greenT polyethylene used, around 5 kg of CO2 is saved. 'We are very happy that Bottle Up decided to use our I'm greenTM polyethylene for their bottles and are contributing to develop a way to transition from a single use solution to a multi-use solution as well as significantly reducing the carbon footprint of the product. For us this means another step into the direction of Circular Economy by participating in initiatives that encourage conscious consumption, consumer awareness and responsibility through engagement,' said Marco Jansen, Circular Economy & Sustainability Leader for Braskem Europe & Asia.